My Protein Shakes Bring All the Girls to the SHOP

My Protein Shakes Bring All the Girls to the SHOP

My love for protein shakes is well known and well documented. Yet despite this, Lauren and I have always had just a “good” blender. We were given a KitchenAid blender from our wedding registry almost 13 years ago, and when that one died we got a Ninja. It was good. Not great.

Well, the Ninja is dead and we decided it was time. Time to step it up. We are now the proud parents of our very own Vitamix!!

Although this may sound like a sales pitch, I can assure you that I do not receive any commissions from them. But HO-LEE SHIT this thing is incredible. I thought it was totally worth the cost after just one use…everything in the blender just disintegrated into a smooth, thick, purple (from the berries) liquid as soon as I turned on the power! And I only had the dial on Level 1 (it goes to 10).

OK, this isn’t about the Vitamix. The purpose of this post is to provide an update on my current shake. As you know, I am always trying new things and attempting to optimize everything I do. And that includes my shake.

Here’s the current recipe followed by a video of the action:

I touch on the benefits of most of the above components in my previous two entries, so check ‘em out:

Now, to go over the two most recent additions:

I’ve been taking fish oil for a long time, but it wasn’t until recently that I figured I would just put it in my shake for the sake of efficiency. And that’s the liquid fish oil, by the way, not the softgels (many softgels are filled with “other” ingredients and aren’t very potent…read HERE). No, it doesn’t taste like fish. In fact, it has just a little hint of lemon and it’s delicious in a shake.

Fish Oil is rich in omega-3 fatty acids, and more specifically EPA and DHA. These omega-3’s have a ton of health benefits, including:

Interesting factoid: EPA and DHA actually originate in algae, and fish that consume algae then concentrate high amounts of these omega-3’s in their tissues.

To quote Dr. Jonny Bowden from his book The 150 Healthiest Foods on Earth:

For the sake of brevity, because the list of benefits of various types of mushrooms (reishi, chaga, lion’s mane, cordyceps, and many others) is quite lengthy, I’ll go with a bulleted list:

Exactly. You can see why I’m fired up about mushrooms. I recommend Four Sigmatic Mushroom Elixirs. These are a cinch to drop in your shake and therefore you’re not having to cook and eat mushrooms at every meal. I have several of them and I just cycle through them with each shake: 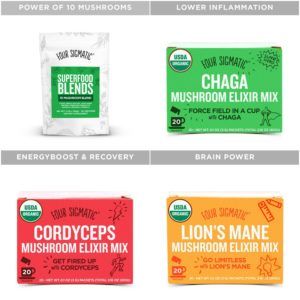 All About Fish Oil by Precision Nutrition

The Healing Power of Medicinal Mushrooms by Dr. Isaac Eliaz